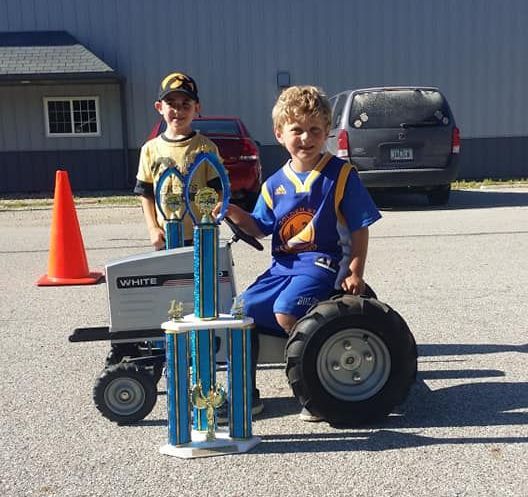 Kids Power Pedal Tractor Pulls, owned by Hanlontown mayor Rick Scholbrock, has been serving smiles to children’s faces all over Iowa and Minneapolis since 2005.

Tractor pedal pulling is a competition between children 4-11 years old where the children sit on miniature tractors with weighted skids and pedal as far as they can.

Scholbrock believes these competitions provide children with a unique way to have fun while still teaching them competitive values.

Scholbrock and his family became involved when a power pedal pull event was held at the Hanlontown centennial celebration in 1999. His daughter, then four years old, wanted to participate and placed first in her age group, qualifying for state.

She placed in the top five on that level, where she then qualified and participated on the national and international levels. Throughout her time growing up, she had 450 wins, including six international, and broke several records.

Scholbrock became familiar and known throughout the power pedal pull community in the area and was asked to take over the business after an unexpected death in previous ownership.

At first, Scholbrock was reluctant, wanting to discontinue involvement in the competitions when his daughter became too old to compete. After some time, he ran a few power pedal pull events and was convinced by his wife to take over the business in 2005.

Scholbrock’s business has grown through the years. In his first year of business, he ran 20 events, and last year, he hosted roughly 100. Twenty-two of last year’s events had over 100 competitors.

Scholbrock noted he hasn’t paid for a business advertisement in 16 years, claiming word-of-mouth works well for his business and that his phone is still constantly ringing.

Event-goers can find Rick and his daughter hosting these competitions in 45 county fairs and other local events, including the Top of Iowa Car Show in Joice, the Scarville Fourth of July Celebration and Cannonball Day and National Night Out in Mason City.

Iowa’s state pull competition will be held on Sept. 10 at the North Iowa Events Center Fairgrounds in Mason City. Scholbrock hopes this location choice will pull in 350-400 competitors and showcase Mason City simultaneously.

Owning Kids Power Pedal Tractor Pull is rewarding for Scholbrock. He enjoys meeting the families of children he met in competitions 20 years ago and catching up with them.

During events, Scholbrock encourages children with disabilities to participate. After they compete, Scholbrock brings those children into the trailer to give them a trophy for their pull. He just wants to bring a smile to their faces.

“I put them on a tractor just like every other kid,” said Scholbrock. “They come out with that trophy and people clap. I ain’t doing it for glory. I want that kid to have a trophy.”

Scholbrock recalled talking to the parent of a child with a disability who had done a tractor pull three years prior who thanked him for what he did for his son.

“He said, ‘My son still sleeps with that trophy. I appreciate it,’” said Scholbrock. “That is success.”

In Focus: Redefining the “Smart” in Smart Cities

Feb 9 2022
Automation has been painted as a threat to employees, and the idea that robots will replace workers and lead to unemployment continues to circulate in some circles. The truth, however, is quite the opposite. According to McKinsey & Company, automation and AI technologies will boost business productivity and GDP growt...Continue Reading

How Leaders Can Demonstrate Empathy And Build Stronger Teams

Feb 9 2022
Empathy is now a strategic imperative for leaders. Here are four ways to embrace empathy and build teams with higher levels of productivity, innovation, and engagement. Click here to view the video.Continue Reading
Add to Report View Custom Report